When I was approached to write about the salute to Montgomery County’s Vietnam Veterans on October 24th at The Universities at Shady Grove, I wasn’t sure how I would approach it. As a combat vet and a history major I knew that I would be invested for a multitude of reasons. What I wasn’t ready for was the emotional outpouring I would witness from not only veterans of the war, but their children, grandchildren, and even those who had never had a member of their family in the conflict. I was also unaware of how seeing these proud warriors and their families would affect me and my own feelings. 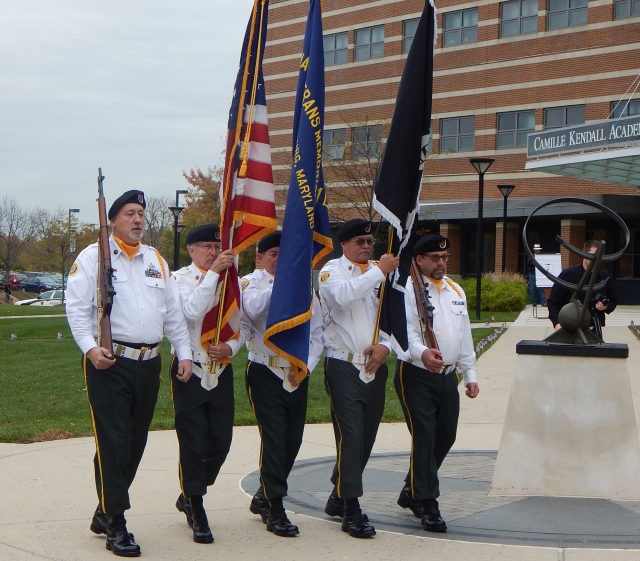 When I arrived at eight a.m. I was struck by the amount of volunteers that had already arrived and were preparing for the day. So many age groups were there to help, from senior citizens, to elementary aged children. This outpouring alone, before the crowds or the guests got there, needs to be acknowledged. Even though the event wasn’t scheduled to start until 10:30 veterans and their families began to mill around the parking lot early. In the military you are always taught to be early, “15 minutes prior to 15 minutes prior” is the old saying. As I walked around I chatted with several of them, most asked about my name tag, seeing that I had served in the Army. Most wanted to know where I was stationed, what I had done, where I saw combat, but there was something that kept happening that took me off guard every time.

Time and time again these heroes would tell me “thank you for your service.” This was the forgotten generation of soldiers, marines, and sailors who never got the big welcome home, or reaped the accolades like my generation has, and here they are thanking me? I was struck by the fact that even though they were there for the honors, yet they were so interested in me and my service, often deflecting the conversation to be about me and away from them. Here among other vets and dignitaries they almost didn’t want the spotlight.

As the ceremony got underway master of ceremonies Bob Schieffer did a wonderful job in presenting not only his own story but introducing the other guest speakers, all of who conveyed their Vietnam experience in moving and oftentimes tearful stories.

Perhaps one of the most moving moments for me was seeing the Bell UH-1 Iroquois or “Huey” helicopter landed. The look on the vets faces as they saw this, some not having seen one since Vietnam. As vet after vet began to tell stories about their experiences with a Huey I heard perhaps the most poignant comment of the day. One gentleman with tears in his eyes said, “I haven’t seen one of these since I was flown out on my back, would have been nice to have come home to something like this.” About that time a little girl, about five, holding one of the tiny flags the Daughters of the American Revolution gave out looked up and handed it to him, which he accepted. “Welcome home,” she said. I think we can all take a cue from this little girl, “Welcome home heroes, welcome home.”