From Discovering His Passion for Science, to Working Towards Discoveries in Cancer

By the time Armen Ghazarian started taking courses at Montgomery College (MC), he was certain that he wanted to be a doctor. So, when it came time for him to decide where to transfer after his two years at MC, the University of Maryland, College Park (UMCP) rose to the top of the list because of its Biological Sciences program; but the location and price tag made it hard for Armen to see himself there.

That’s when he learned about the Universities at Shady Grove (USG). Having just opened its doors in 2000, USG was a new model that was changing the way education was delivered in Montgomery County. As a regional campus, USG offers degree programs from 9 Maryland public universities in Rockville – one of which was UMCP’s B.S. in Biological Sciences program.

So, Armen applied to UMCP and selected to take his classes at the USG campus.  He was among the first set of students to attend the new Montgomery County campus.

“USG was a lot closer to my home, which was great for me because at the time, I didn’t have the financial resources to live on campus in College Park,” says Armen. “Plus, it was awesome to learn about so many programs from the state’s top universities housed right here in Montgomery County. It was exciting to be part of that.”

Like most students interested in a medical field, Armen started on the pre-med route, until an elective course in epidemiology – the study of disease and its determinants amongst specific populations – changed his path.

“Looking back, I didn’t know what epidemiology was. It was just an elective that sounded interesting,” says Armen. “As soon as I started the class I realized I had found the start to my career.”

“It was exciting to see so many electives offered here, like the epidemiology course that changed my career path.”

Armen credits the wealth of electives, small class sizes, and personalized attention from professors as contributing factors to the success and personal transformation he experienced at USG. With the help of one of his advisors, Armen received an internship in a lab close to campus, which confirmed his passion for epidemiology and research.

Now, Armen is an epidemiologist at the National Cancer Institute, where he looks at various data sets to try to find a link between certain risk factors and cancer types.

To Armen, the Power of 9 is success. “I can’t believe that I’ve made it this far, and I have USG to thank for the beginning of my success,” says Armen. “I was introduced to epidemiology through a course at USG which shaped my future.”

“To me, the Power of 9 means an opportunity for students who don’t have the resources or time to commute to all of these institutions to come to something that is close. At USG, there are so many programs offered through different institutions that your opportunities are truly endless.”

Find your transformation at the Universities at Shady Grove. #Powerof9 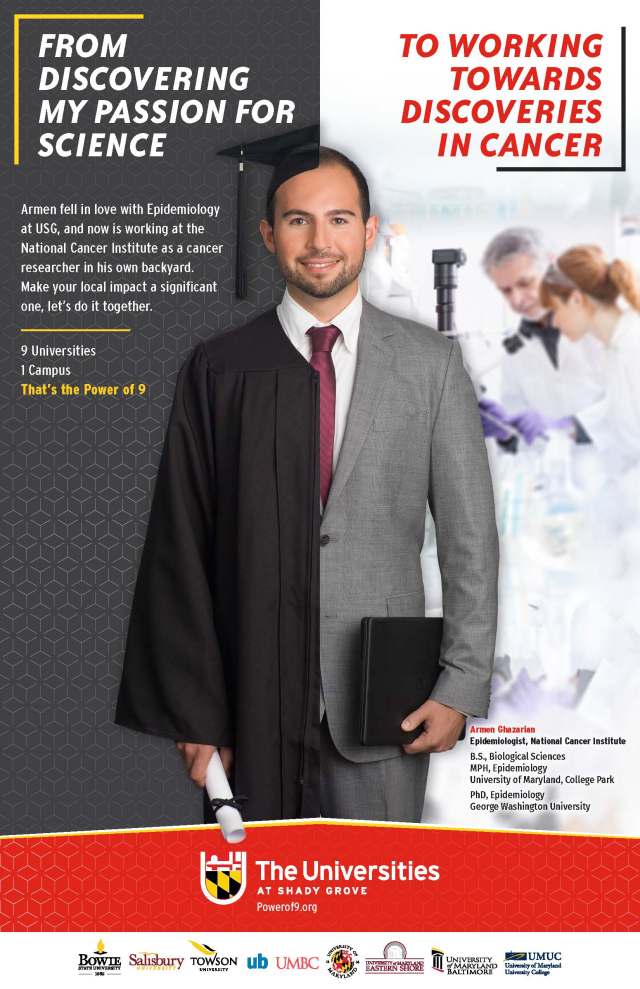