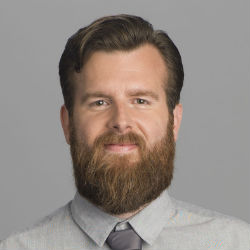 Reflecting on his time in higher education, Brian identifies himself as a perennial college student. While at Montgomery College (MC), he worked various jobs and took classes on and off, unsure of what he wanted to do. One job he had was working as a freelance writer creating business development proposals for a government contractor, and he noticed he had the qualifications and experience to do that as a full-time employee, except for one aspect: he didn’t have a bachelor’s degree. It was then that he decided to continue his education and earn his bachelor’s degree.

While at MC, he learned about the Universities at Shady Grove’s (USG). He realized the University of Baltimore (UB) offered a B.S. in Simulation and Game Design at USG.

“It was great option for me, to have a campus so close to where I lived, especially since I needed to continue working to support myself while pursuing my degree,” said Brian.

At USG, Brian thrived in the state-of-the-art campus and fully equipped computer labs. He really enjoyed the diversity of the student body. He was able to enroll in a few interdisciplinary classes with students from other majors, which allowed him to view gaming in a new way. “I was able to get perspective and input from people who weren’t like me, who don’t think the way that I think, and had different needs and wants related to the product that I was trying to learn how to create,” said Brian. “It helped me design better gaming products.”

Not only did the diverse student population allow Brian to grow as a game designer, but it was essential in developing his professional network. “With nine different schools at the Universities at Shady Grove, it’s a great opportunity to network,” said Brian. “You meet people from all kinds of different industries and jobs, and you make great connections. Even today, I continue to reach out to those contacts to help me with projects.”

As part of his program, Brian completed an internship with Baltimore County Public Schools (BCPS) during which he was required to design an educational game. His idea was selected by BCPS to move forward to the next phase, so Brian led a group of interns to develop their environmental science game, “My Own Biome.” BCPS funded further development of the game and it was later implemented in the curriculum for middle and high school students.

In a two-year span, Brian went from taking courses at USG, to teaching courses at USG, to running his own company using some of his students as interns. Now, he works at Coley & Associates, Inc. as an Instructional Games Designer, and he credits the experiences he had at USG for helping him achieve his success.

“The Power of 9 is the opportunity to make the best out of yourself.”

1 Response to From Video Game Enthusiast, to Educational Game Developer