Have You Heard the Buzz about Patti Wong’s Interesting Hob-bee?!

Patti Wong puts on a suit everyday to prepare financial reports, assist with budgeting, and manage scholarship funds. But during her lunch break, the senior accountant at the Universities at Shady Grove puts on a different suit — a beekeeping suit. When she worked at the University of Maryland, College Park, she took advantage of tuition remission and took agricultural classes. She decided to take a class about bees because she thought it was an easy “A” and because her grandfather had colonies as well. As a result, her natural interest grew and she immersed herself in the world of bees. This has caused her to become more environmentally conscious, as over the past several years the bee population has declined rapidly. More specifically, a report by the Bee Informed Partnership reveals that from April 1, 2018, to April 1, 2019, the managed bee population decreased by 40.7%.

This unfortunate situation has been made even worse as the U.S. Department of Agriculture has temporarily suspended data collection for its honeybee colony report due to federal budget cuts. Critics of the move contend that it was motivated by the Trump administration’s plan to lift the ban on certain pesticides that was implemented under the Obama administration.

While necessary for pollination, as their name suggests, honey bees, are also required for producing honey. Under ideal conditions, a good hive can make 200-250 pounds of honey according to Ms. Wong. Nectar, a sugary fluid, is secreted by flowers. Bees sense the negative electric signal created by the flower which tells them if the flower is worth visiting. Once bee scouts find the source of nectar, they go back to the hive and communicate to the others where it is, in a unique method called the Waggle Dance. The direction the bee moves in relation to the hive indicates the direction, while the duration of the waggle signifies the distance. The nectar is taken by bees back to the hive, injected with enzymes, and dehydrated before being stored into wax-like cells until they are less than 18% moisture. As a result of its low moisture level, honey will never ferment or expire unless more moisture is added.

There are many other jobs in the hive other than a scout notes Ms. Wong, like housekeeping bees that make sure the hive is organized, the queen’s attendants which groom the queen, and guard bees which are the ones that sting you if you come too close to the hive.

In addition to harvesting honey, Ms. Wong then uses the beeswax to make all kinds of other products like candles, lip balm, hand lotion, and tiger balm, a medical ointment. This year the Universities at Shady Grove hosted the Montgomery County Beekeeping Association for their extraction day. They used the Marriott Teaching kitchen as a space for new beekeepers to come and harvest their honey and honeycombs. Approximately 20 members attended and together they extracted more than 760 bottles of honey!

Bees are a necessary factor for commercial agriculture. Without their presence, the strain on the agricultural industry would be immense due to the need for commercial pollination, in which companies use trucks to haul in thousands of hives of bees to pollinate their crops. In 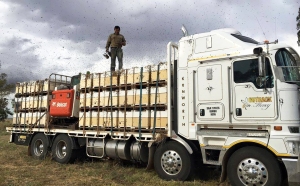 February, 60% of colonies go to California to start pollinating almonds, then to Florida and the South for citrus and berries, before finally moving up to the northeast for apples and lowbush blueberries. Their importance may seem obvious to some, but many Americans are still afraid of bees and believe they wouldn’t lose any sleep if bees disappeared. Ms. Wong counters that everybody needs to be properly educated, as most people don’t like bees because they think they’re allergic from the swelling after a sting. However, bee stings are actually highly beneficial, as the venom

boosts your immune system. Ms. Wong claims she hasn’t been sick in over 10 years because of regularly being stung while handling her bees. Sting therapy has also been created to help with arthritis, MS (Multiple Sclerosis), and other medical conditions. Although honey bees get most of the press, there are plenty of wild bees that pollinate and need to be protected the same way honey bees are.

When asked her favorite part about keeping bees, Ms. Wong answered that while at first it was the goods that are reaped, now it is the humility of constantly learning new aspects of beekeeping. She recounted that this past year she had 10 hives, some Russian, some Italian, and some Canadian, and learned a lot about how to be a better beekeeper. The EAS (Eastern Apicultural Society) educates the public on bees and hosts many meetings and seminars about bees and beekeeping. They will even certify you to become a ‘master beekeeper’ after you have passed a test and completed all other prerequisites. As 40% of colonies were lost this past year, Ms. Wong hopes for a future with better, more natural practices, and an educated public that is actively aware of the impact that bees have on the environment. This will allow us to preserve these ecosystems so future generations can appreciate the tasty benefits of nature at work.