From Student to Commencement Speaker 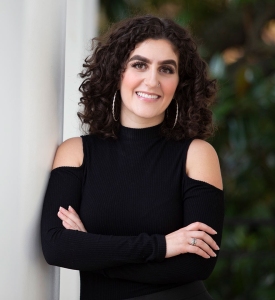 For Bita Riazi, graduating from the University of Maryland, College Park (UMCP) is the culmination of the hopes that her immigrant family carried to the United States nearly 30 years ago.

Her parents left Iran and all their relatives behind for Maryland in 1991, hoping then-one-year-old Riazi’s educational prospects would be brighter. And while the journey to a degree wasn’t a straight line, it has been rewarding.

“I had a lot of faculty who believed in me,” she says.

Riazi earned an associate’s degree in general studies from Montgomery College in 2011 and planned to immediately transfer to UMCP. But when her parents faced several health crises, Riazi, an only child, instead took care of them and worked full time at a spa in Gaithersburg.

“I always did want to go back and finish school, but sometimes life happens,” she says. “Family is first.”

Beset by doubts about being able to navigate a return to higher education, Riazi attended three open houses at the Universities of Shady Grove (USG). USG is a campus in Rockville that offers degree programs from nine Maryland public universities including UMCP. Learning that UMCP at USG offered a bachelor’s degree in communication enabled her to take the leap. It was the best way, she says, to honor the sacrifices that both she and her family had made.

Over the next two years of pursuing her bachelor’s degree in communication, Riazi made Dean’s List every semester and was nominated for the dean’s Senior Scholar Award. Since August, she has also been a programming and production intern in the D.C. Office of Cable Television, Film, Music and Entertainment, booking guests, researching stories, writing scripts and other duties.

While interested now in a career in media and entertainment reporting, Riazi ultimately wants to work in a field that can help and inspire people, be it through writing or speaking. Her experience at UMCP has been a key step toward that goal.

“Between the faculty and my fellow Terps, they all have such impeccable vision,” Riazi says.

The 2019 University of Maryland, College Park Winter Commencement Ceremony will take place at 6 p.m. Dec. 17 in the Xfinity Center. Individual college and school ceremonies will be held on Monday, Dec. 16 and 18. For more information, visit commencement.umd.edu.